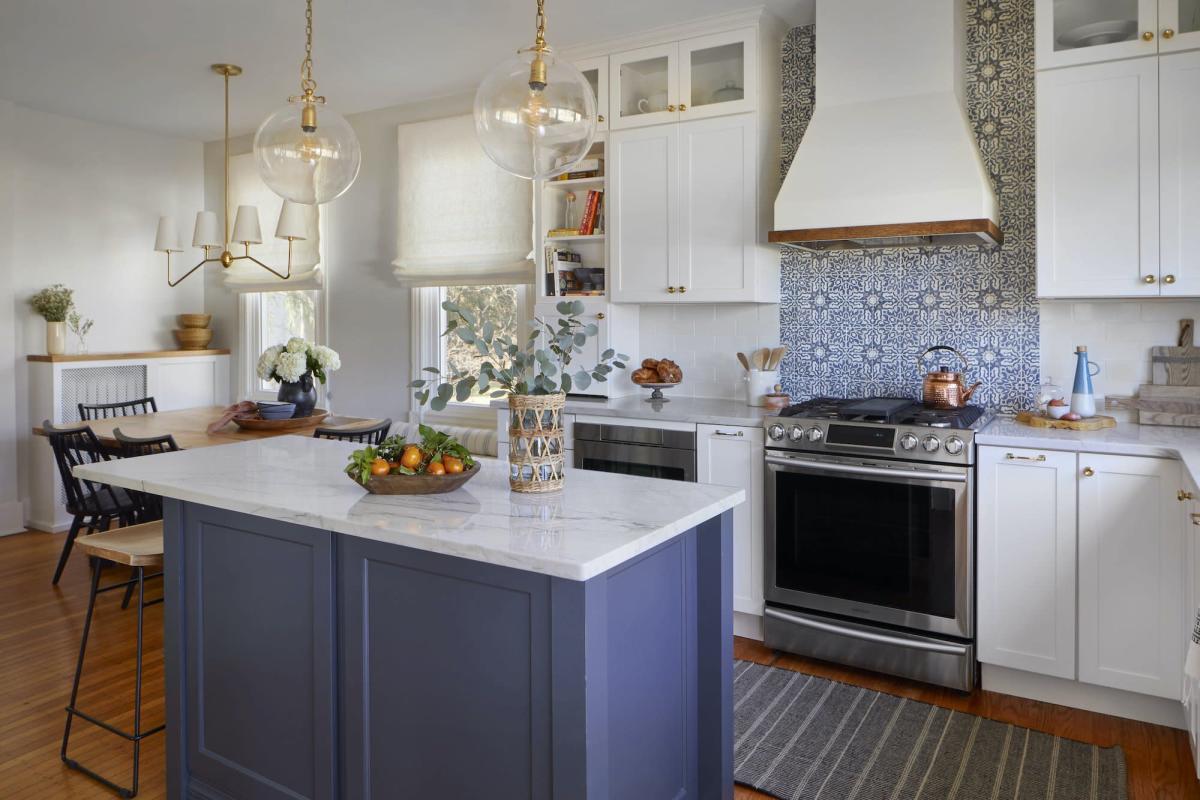 Libby Rawes, the owner and principal of Sharp and Grey Interiors, had to make sure she accomplished one thing for this project in the suburbs of Philadelphia: compromise. “The clients were torn,” she says.

Their home, which they share with their two little girls and a cat, was set in a neighborhood that exemplified all the benefits of age. Mature trees lined streets filled with eye-catching historical details, but none of the ones worth saving were anywhere near this kitchen. “It had been redone sometime in the ’80s with little thought to layout and storage,” Rawes notes. “One of its biggest downsides was that it was cut off from the larger living area by a peninsula.” The owners agreed that the entire kitchen needed to be reimagined. They sought updated materials—like honey-hued wood floors, quartzite countertops, and fully-extended cabinetry—but they couldn’t quite agree on the palette. “One wanted an all-white kitchen, and the other wanted some color,” Rawes says. a

RELATED: The Best Kitchen Paint Colors, According to Interior Designers

Rawes envisioned a kitchen that was “light and bright,” with timeless accents that would work with the home’s past and still feel fresh in the future. The peninsula was removed along with a small window above the oven, making way for a paneled island and a custom hood. The window above the sink was centered and enlarged, while a pair of panes beside the dining area remained to let light in on the opposite side of the room. “We also added new window treatments, lighting, and appliances,” Rawes says. “We really wanted to incorporate seating with the island, but we didn’t want to impede the flow of traffic. So we ended up putting two stools on the end with a small overhang for the little girls or guests.”

The couple was on board with all of these changes, so when it came to the big compromise, Rawes figured that out, too. She painted the cabinets white and offset the island in a cheerful shade of blue, but tied them together with gold finishes on the doors and fixtures. And for a showstopping feature, Rawes installed blue-and-white ceramic tiles behind the range, which just so happened to double as a nod to the couple’s combined sensibilities. “Bringing in a touch of blue in the tile creates continuity,” she says. “It tells a story for the whole space.”

Decorative tiles in an eye-catching pattern will become the focal point of any kitchen. The blue coordinates with the island, making the entire design feel cohesive.

Clear globe pendant lights with gold hardware fit in with the rest of the gold fixtures in the room, while the transparent shade doesn’t distract from the design.

An oak seat and iron base combine in this elegant counter stool. In a space with lots of white paint, natural wood introduces a touch of warmth.