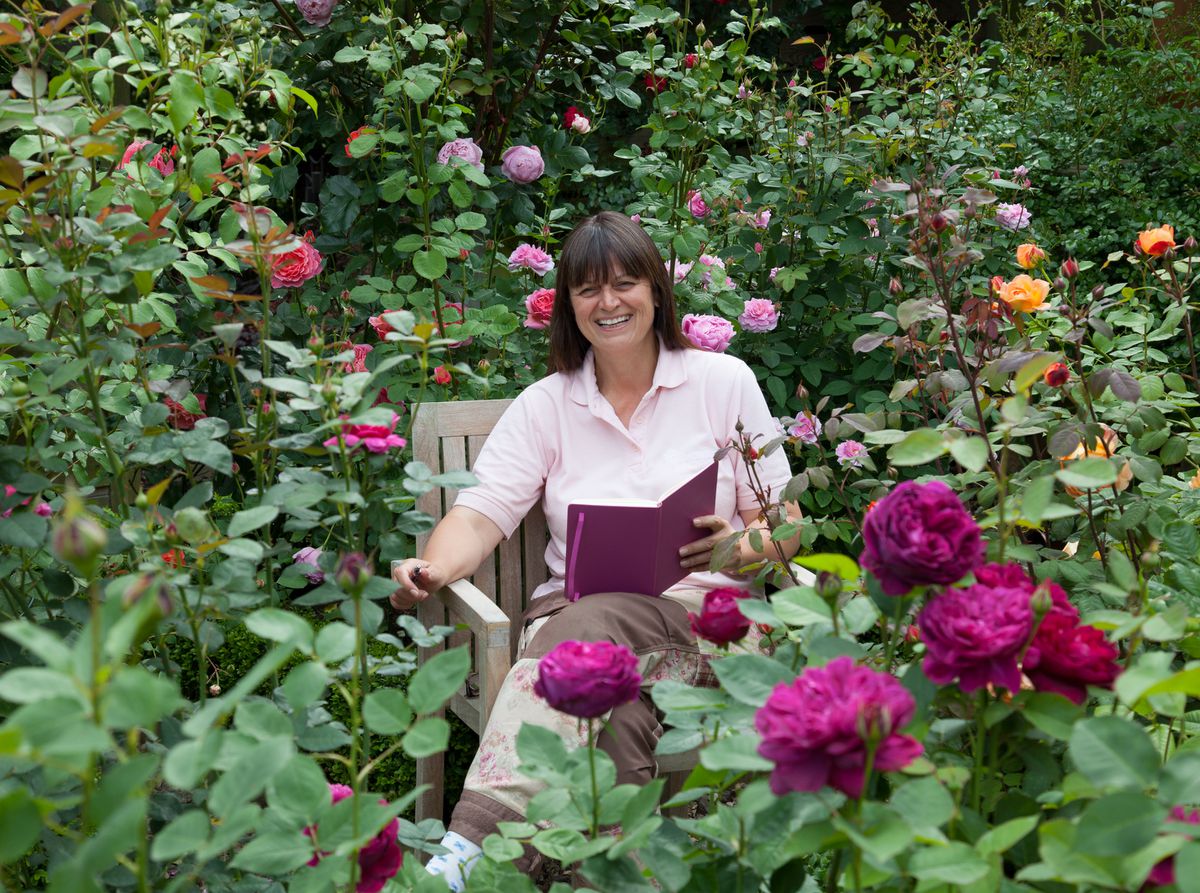 Filled with flowers and plants that have played a part in life-saving cancer research, Karen Tatlow’s legacy garden will go on show at the RHS Malvern Spring Festival.

She has taken emotional inspiration for the garden from the story of her own great-niece, Lauren, who felt connected to her grandfather after his death from cancer by looking at the moon.

As a result, the moon gate, an architectural feature symbolising renewal and rebirth, is at the heart of Karen’s creation and links together the garden’s two halves.

“Lauren was extremely close to her grandad, David, who was my brother-in-law,” says Karen, who lives in Whittington.

“She hated leaving him when they’d spent time together, so he used to tell her that all she had to do was look at the moon and know that he would be looking at it too. That way they would always be connected.

“David was diagnosed with pancreatic cancer in 2015 when Lauren was 14. When David died in 2017, looking at the moon made her feel closer to him again. In fact it has become a symbol of connection to David for the whole family – with each full moon the family Facebook and WhatsApp groups all light up with thoughts of him,” she explains.

Cancer Research UK’s Malvern Legacy Garden is the fourth garden in a series of show gardens that have been designed for the RHS shows. Previous gardens have been hugely successful in winning awards, including gold medals at 2019 RHS Hampton Court, 2021 RHS Hampton Court, and 2021 RHS Tatton Park.

The brief for each designer was to create an immersive, contemplative space that symbolises how leaving a gift in a Will to Cancer Research UK ensures research can continue to save lives for generations to come.

Karen conceived the idea of using the moon gate to symbolise the hope that legacies can bring.

The visitor first travels through one half of the garden which is full of colourful flowers, echoing the blue, pink and purple palette of Cancer Research UK’s logo. The vibrancy and variety of this section of the garden reflects the passion and imagination of those who have pledged to leave a gift in their Will for research.

The central moon gate forms the link between the first and second section of the garden. Set into the ground is an engraved paving circle that represents how gifts left in Wills fuel Cancer Research UK’s work and lead the progress to beat cancer. After stepping through the moon gate there is a shift to a calmer, more reflective planting scheme, composed of greens and whites. This part of the garden has a more formal and clinical feel, symbolising the scientific research that is funded by legacy giving.

Many of the 1,500 plants in the garden, ranging from well-known favourites such as rowan and aquilegia, to more obscure varieties such as podophyllum (mayapple) and vaccinium (blueberry), have been chosen because they have a connection with cancer. Chemicals from plants in the garden have been tested for their anti-cancer properties and some have even led to drugs that are in use today for treating cancer.

“I wanted the garden to demonstrate the symbiotic relationship between leaving a gift in your Will, and actual cancer science that helps people survive,” explains Karen.

“It’s quite an abstract concept to get across and it does require a leap of the imagination to realise that leaving a legacy gift now, today, can improve treatments for people in the future.

“Above all, the garden is a place of hope and connection to others. Moon gates are traditionally symbols of renewal and rebirth, as well as representing wisdom, immortality and knowledge. All of these qualities are inherent in the concept of legacy giving – where an act of wisdom by one person can give a new lease of life to others.”

Originally trained as a ballet dancer, Karen was forced to rethink her career after a knee injury prevented her dancing professionally. She studied architecture and interior design, but then moved into a career in make-up, becoming a senior make-up artist for Revlon.

After Karen was promoted to more senior commercial roles, she realised she missed day-to-day creativity in her life. She had always designed gardens for her own pleasure, so she retrained as a garden designer and has not looked back. Her original degree in architecture always informs her work, which aims to give a feeling of enclosure and progression from one space to another.

“I really enjoyed playing with the idea of the two sides of the Cancer Research UK garden being based on the same-sized circle, which encapsulates the relationship between research and legacy. I think the architectural aspects of garden design – the relationship between volume and mass – are just as important as the planting and I hope this comes over in the Legacy Garden,” says the 53-year-old.

“Karen’s garden is designed to take you on an experiential journey from the very start,” added Helen Smith, who is the senior manager for legacy engagement at Cancer Research UK.

“She has created a very uplifting and thought-provoking space, which shows clearly just how important gifts in Wills are to the charity.”

“It is lovely to have our Legacy garden for the Malvern Spring Festival created by a designer who is also from the West Midlands region. We hope visitors from the Midlands and across the UK will enjoy Karen’s Cancer Research UK garden and will take both hope and inspiration from its stunning planting and design,” add Jane Redman, Cancer Research UK spokesperson for the West Midlands.

The RHS Malvern Spring Festival takes place at the Three Counties Showground from May 5-8.

After the show, plants from the Legacy garden will be on sale at Cancer Research UK shops in The Cross, Worcester, and St Andrew’s Square, Droitwich from Tuesday, May 10, while stocks last.

In the spirit of legacy giving, the whole Cancer Research UK garden will be relocated to St Catherine’s Hospice in Preston after the show is over.

Tickets for the show are available from cruk.org/rhs-malvern-2022