EASTON, Md. — Designer of the Year, presented by Decorating Den Interiors, has been awarded to franchise owner Monique Holland of Washington D.C. This was the company’s 38th International Dream Room awards presentation, held at the company’s Designcon 2022 annual conference in Myrtle Beach, S.C. 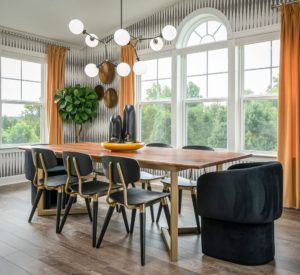 Holland’s modern and industrial design of dining space with bold wallcoverings was judged best in category and the overall best of 300 entries in 10 categories by interior design journalists throughout the U.S. and Canada. She also had the first-place home office, second-place family room and won three other separate categories of judging competitions.

“I am thrilled to win this honor, especially since this was the first time I entered Dream Room,” said Holland. “I started my business only four years ago. Being Designer of the Year and winning so many other awards is very exciting.”

The franchise sisters Barbara Elliott and Jennifer Ward Woods and their design team of Stone Mountain, Ga., were first runner-up. They won first in bedroom, kitchen and outdoor, and won second in living room and outdoor, as well as third in bathroom. Their family room also took second place among the winners in each room category.

Second runner-up was Lynne Lawson of Columbia, Md., with her design associate Laura Outland, whose bathroom took third place among the first-place rooms. Additionally, they won third place in bedroom and first in another judging.

Other design awards include: