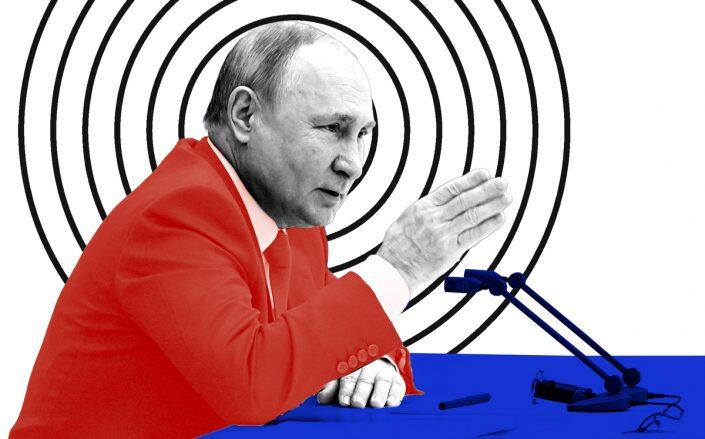 Vladimir Putin (Getty/Illustration by Kevin Rebong for The Real Deal)

Russian President Vladimir Putin’s invasion of Ukraine has set the stage for global economic turmoil and sanctions whose impacts will stretch to the U.S. real estate market.

The invasion has led the U.S. government to join its allies in moving to freeze the assets of Russian elites close to Putin, and will likely slow real estate investment from both countries.

The full extent of the sanctions is still being determined. Russian and Ukrainian buyers represent a small part of the overall U.S. real estate market, but experts agree that it will become more difficult for many Russians to do business in the U.S. Those difficulties will depend on the way in which the international community pursues further sanctions, but loan approvals and property sales could be delayed as the crisis intensifies.

Any transaction involving Russian oligarchs — who have purchased some of the priciest properties in Manhattan and Miami — will become much more challenging, experts say.

“If there is need for a payment to or from a Russian oligarch in the U.S. or the EU, that will be hugely problematic,” said Ross Delston, an attorney and independent anti-money laundering expert.

The assets of Russian officials identified by the U.S. as having ties to or supporting the invasion will be blocked and frozen, according to attorney Harold E. Patricoff Jr. This could mean anything from real estate to cars, yachts or jewelry.

The Treasury Department’s Office of Foreign Assets Control (OFAC) is compiling a list of Specially Designated Nationals of Russia and Belarus who will be targeted by sanctions.

The Magnitsky Act — named for tax attorney Sergei Magnitsky, who died in a Russian prison in 2009 after alleging widespread corruption by government officials — authorizes the U.S. government to impose sanctions on those it perceives to be human rights offenders, including freezing the American assets of individuals on the SDN list.

“There are a lot of wealthy Russians and wealthy Ukrainians and their names are on the Magnitsky list and their assets are blocked in the U.S.,” said Patricoff, a Duane Morris attorney focusing on international disputes. “If the asset is blocked by OFAC … it cannot be sold, mortgaged and it is subject to forfeiture, which means the government could quickly take it away and the government could sell it.”

An asset freeze only applies to those close to Putin, likely a small subset of Russian investors in the U.S., but banks are likely to place any deals with Russian businesses or investors under a microscope.

“In any sort of transaction, ordinary due diligence is going to be heightened,” said Andrew Ittleman, an anti-money laundering specialist and founding partner of the Miami law firm Fuerst Ittleman David & Joseph.

The U.S. is also imposing sanctions on Russian state-owned banks, including the country’s largest, Sberbank, as well as its subsidiaries, forcing American banks to sever ties within 30 days in an effort to cripple the Russian financial system and push it into backing out of the invasion.

“Apparently, a lot of the money held in Sberbank is held in U.S. dollars, but in order to process it, it would have to go through a U.S. account,” said attorney Aleksey Shtivelman of Shutts & Bowen, who focuses on international disputes. “That is what the government is trying to stop.”

The deterioration of U.S.-Russian relations could also lead to Russia getting kicked out of the Society for Worldwide Interbank Financial Telecommunication, or SWIFT, a messaging network that facilitates financial transactions between banks around the world. President Joe Biden has thus far resisted cutting Russia off from the network, citing apprehension from European allies.

“If SWIFT will be taken away from them, and hopefully that happens today, that would complicate any kind of transaction,” said Natalia Raphael, a Moscow-born real estate agent with the Keyes Company who caters to Russian and Ukrainian clients in South Florida. “If they cannot use wires, if they cannot transfer money freely as they have been so far, that complicates business quite a bit.”

“There is a real credit risk that you didn’t have before,” he said. “The sanctions situation is so fluid. You could be non-sanctioned today, but that could change tomorrow.”

From Sunny Isles to Manhattan

“Since then, the population of Russian buyers in Sunny Isles is about 50 percent what it used to be,” Studnicky said.

Russian investment and interest has fallen dramatically in recent years. Between August 2017 and July 2018, it represented just 2 percent of the foreign investment market in Miami, according to a National Association of Realtors report.

The invasion of Ukraine has already caused some deals to be put on hold in South Florida, brokers said. One buyer of an $870,000 condo, worried about the conflict’s effect on the stock market, canceled their offer, said Mike Pappas, owner of the Keyes Company, one of the largest brokerages in South Florida.

“I think certain people will hesitate. There’s more than just the war,” Pappas said. “It’s the complexity of the war, the interest rate rise and the stock market adjustment.”

In New York, Russian buyers have made some eye-popping residential purchases.

Billionaire Roman Abramovich paid $96 million between 2015 and 2017 for four properties on Manhattan’s East 75th Street, with plans to build a mega-residence before selling the properties to his ex-wife in 2018 for $91 million.

Oligarchs’ purchases drew the ire of former mayor Bill de Blasio during the investigation into Russian interference in the 2016 U.S. presidential election. De Blasio complained that these oligarchs had essentially stolen their country’s wealth and funneled it into New York City real estate, but he had little recourse to do anything about it.

“It manifests here as people with a lot of ill-gotten gains buying a lot of property — I don’t like it one bit,” De Blasio said in 2017.

And on Friday, Manhattan Borough President suggested in a tweet that oligarchs who have invested in New York City real estate should have their assets expropriated.

“For years Manhattan has been one of the most popular safe harbors for Russian oligarchs to park their cash, especially via ultra-high-end apartments,” he wrote. “It’s time to start seizing their properties. #SupportUkraine.”

In addition to sanctions, there will be some logistical challenges for Russians looking to invest in America.

Attorney Galina Urman, who focuses on immigration and EB-5 matters, said she is hearing from U.S. clients who want to bring their family members in Russia and Ukraine to America.

Urman, who was born in the former U.S.S.R., said a slowdown in investment has resulted since the pandemic began. “I do anticipate that the slowdown will continue due to what is going on in Ukraine,” she said.

“It’s just the logistics of money transfers and traveling here that will be more complicated for them to choose properties,” said Raphael, of the Keyes Company. “They can definitely buy properties over FaceTime, but not everyone would like to do that.”

Others say that Russians and Ukrainians seeking a safe place to park their cash could be drawn to U.S. real estate. Foreign interest in American property tends to increase in times of political instability abroad.

“We’ve been seeing a much higher level of interest in deals from Ukraine and Russia in anticipation of the war” over the past two months, said South Florida broker Mariana Shulga, who is also Ukrainian. “Between Covid and now the war, they understand the time is now.”

Cindy Scholz, a broker with Compass, said that such conflicts have caused more interest in properties in New York and — more recently, as Covid-19 put a spotlight on the area — in the Hamptons.

“These investors are going to want to get their money out of their countries and bring it over to what’s known as one of the safest investments, which is investing in the Hamptons and in New York City,” Scholz said. “New York City is always seen as a really safe parking spot for money.”