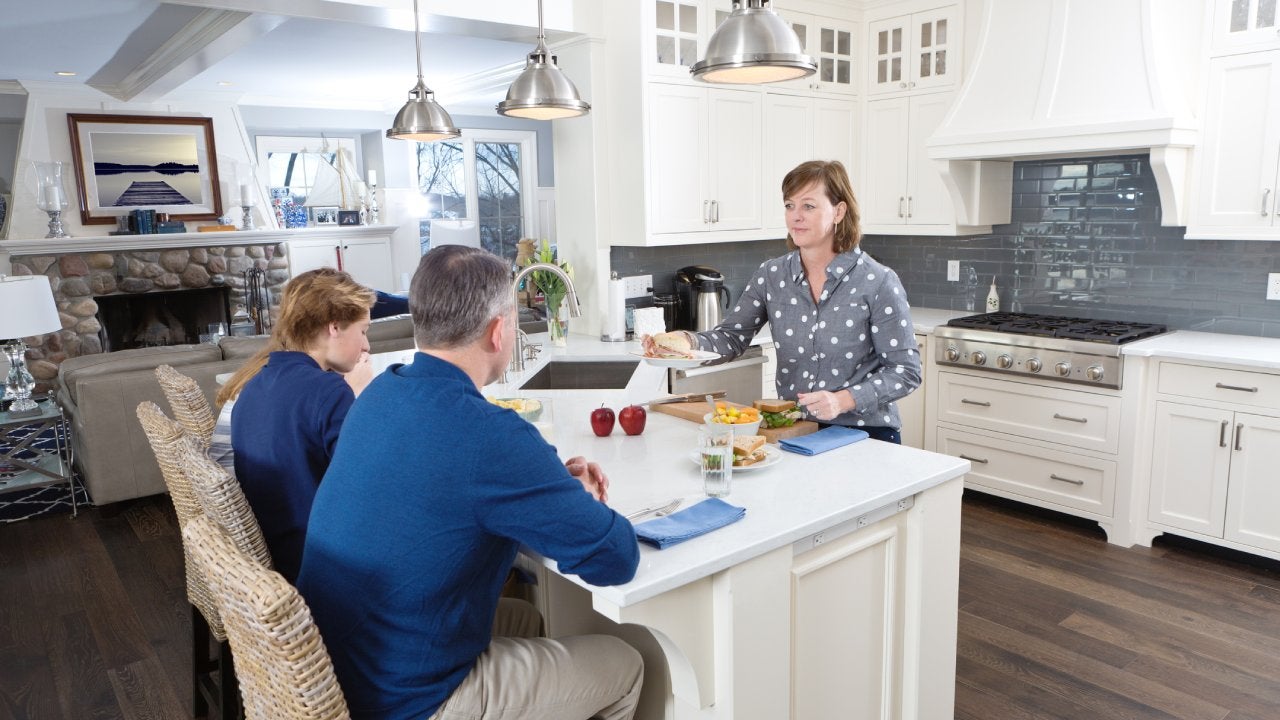 Throughout history, kitchens had traditionally been closed off from the rest of the house – on another floor, at one end, or in general as far as possible, as if the activity of cooking had nothing to do with the business of living. But in the 1990s, the walls started to come down and the open kitchen — proudly on display, and visible to other rooms — became the design trend du jour. The kitchen went from workspace to entertainment space, a place to invite others in instead of keeping them out.

That does not sit well with everyone now, though, and there are signs closed kitchens might be making a bit of a comeback. While the open-home concept (which includes an open kitchen) remains popular, it’s not overwhelmingly so: just over half (51 percent) of Americans say they prefer the layout, according to a 2021 Rocket Mortgage survey. Guests may love to congregate around the cook, but people don’t necessarily want the kitchen to be party central: Only 12.4 percent of respondents said they spend the majority of their time there when entertaining at home.

Plus, the most recent annual American Institute of Architects’ Trend Survey found that requests for open-kitchens designs have seen a significant drop in recent years, from 47 percent in 2018 to just 36 percent in 2020, the surveyed AIA member firms reported.

So, what do the open kitchen and closed kitchen concepts bring to the table, and which one is better for you?

The closed kitchen is the traditional type, a fully separate room that’s often at the back of the house (with a door to the yard) or off to one side (connected to the garage). There are walls that cordon it off from other areas, keeping the kitchen as its own designated room rather than a space meant to be shared or explored.

“The positive to this concept is that the mess of the kitchen is hidden,” explains Ariana Lovato, owner/principal designer at Honeycomb Home Design, a California firm. “But whoever is in the kitchen is removed from the rest of the family” or from guests.

Although they began to dominate new builds in the 1990s, open floor plans date back to the mid-20th century — a logical extension of the idea that, in modern life, “the kitchen is the hub of the home and is where everyone gathers,” Lovato says. So the open kitchen makes that concept official, so to speak, by integrating the room into the rest of the house — or at least, a good chunk of it.

An open kitchen is one that shares unpartitioned space with another room, and in so doing blurs the divisions between spaces for cooking, dining and living. While closed kitchens arguably reflect an age when cooking was a dirty — even dangerous — servant’s job, the open kitchen reflects the informality and fluid roles of contemporary households, advocates say.

Finding it hard to choose between an open and closed kitchen? Or reluctant to take on the expense and hassle of converting from one to another? Take heart: There are a couple of ways that you can capture the best of both kitchen worlds.

Simone de Gale, CEO/director at London’s Simone de Gale Architects, suggests going with an open-plan design, but then introducing a flexible divider, like pocket doors, sliding doors or curtains — a temporary wall, in a way. “You can have the space completely open as a preference, or close the screen or partition as and when you desire,” she explains. “This is called a flexible space, and will help you adjust your home for most comfort at your own pace.”

Another approach, according to Lovato, is to create a kitchen-within-the-kitchen for the messier tasks: “Incorporate a butler’s pantry [aka a scullery] that can be used as a secondary prep space. Oftentimes, we’ll install a sink, dishwasher, wall oven, so that someone can be prepping in there and then use the rest of the kitchen as a buffet or entertaining space.”

A variation on this idea, if layout permits: Carve a big rectangular space, like a pass-through window, into the wall of a closed kitchen that borders on another room or the rest of the living space. This will create a semi-open effect, and a partial view into the kitchen. You could also install blinds or shades over this opening, keeping them up if you’re chatting and cooking, lowering them when you want a more formal look or to hide the mounds of pots and pans.

Open kitchens frequently feature elongated eat-at counters with chairs or stools pulled up to them. You can get a semi-closed effect here by raising the countertop, obscuring the view of the work surfaces and sink. This provides some privacy for the chef, hiding their efforts, while still leaving them space to socialize.