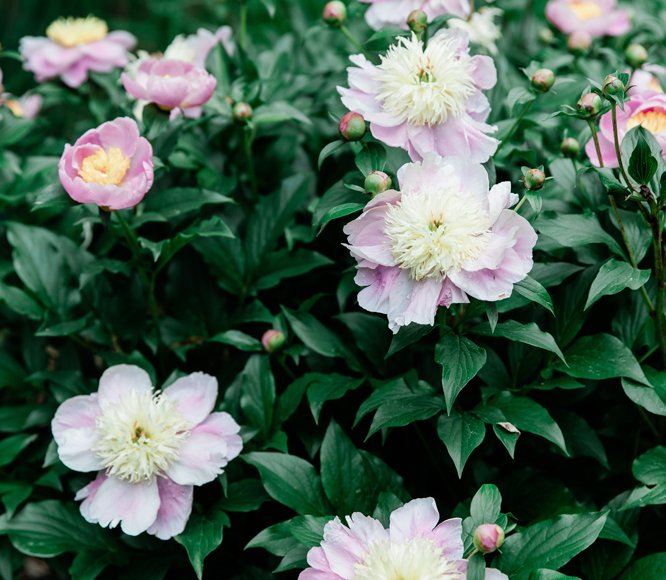 Originally from Southern California, Betsy Chappell – a Lexington landscaper with a keen eye for design, and the owner of the container garden business Blooms – says she didn’t discover her green thumb until she moved to Kentucky in the 1980s. Chappell was a nurse at the time, and she and her husband, Joe, who had a horticulture background, relocated to Lexington after he was hired by the University of Kentucky pharmacy department. As he transitioned from the horticulture world to pharmaceutical science (he now serves as chair of UK’s pharmacy department, where he specializes in plant-based medicine), she closed the chapter on her nursing career to focus on her growing family – and found a newfound passion for digging in the dirt.

Her interest in garden design was fostered by spending lots of time in the backyard while raising two children, she explained, as well as by Kentucky’s distinct seasonal changes, something she hadn’t experienced living in Southern California. As she and her family moved throughout their first two decades in Kentucky, staying in the Southern Heights neighborhood, Chappell’s approach to gardening evolved.

Taking notice of her burgeoning hobby and talent, a friend encouraged Chappell to seek a job in the landscaping industry. She heeded that advice, and in 2003 took a part-time, seasonal job with Henkel Denmark, a commercial landscape business founded by Bill Henkel and Gordon Denmark in 1999. (The company was acquired by the Alabama-based landscaping company Landscape Workshop in 2018.) Chappell, who worked for the company for 15 years, said it was an honor to work for such a highly esteemed business and that much of what she knows about landscaping was gleaned during those years.

“They hired me to work in perennial gardens, but I whittled my way into working with the landscaping crew because I wanted to see the design process,” she explained. During her tenure with Henkel Denmark, she became intrigued with the landscaping industry, gaining lots of hands-on experience. After leaving the company when it changed hands in 2018, Chapell saw potential in creating a small business that specialized in residential and commercial container garden design. Container gardens were a niche she had always enjoyed working on when she had the opportunity through Henkel Denmark.

“What I’ve discovered is that the big landscape companies don’t have the need or want to have someone on their staff full-time to do that – it’s not worth it,” she explained.

Chappell’s backyard garden in the Edgemoor Drive home she and husband bought in the early 2000s is heavily influenced not only by the professional landscaping expertise she has garnered over the years but also by the hand of Scott Pfeiffer (Scott Pfeiffer & Co. Landscape Design), a longtime family friend whom Chappell hired to help her with the yard after purchasing the home. Pfeiffer created the bed lines for the gardens, which are marked by their elegant curvature, and also built the pergola and provided hardscaping for a second seating area in the middle left section of the garden.

Pfeiffer said that Chappell’s yard is a “a great example of what a ‘home gardener’ can accomplish – even though she is obviously far beyond a home gardener at this point.”

“We work well together, as she helps to soften my designs with planters and well-manicured and developed perennial beds,” added Pfeiffer, who was quick to acknowledge that Chappell deserves credit for the lion’s share of the yard.

The home had previously been owned by a couple who lived there until old age. With its deep backyard overgrown almost entirely, it provided a blank slate for Chappell and Pfeiffer – albeit one with its fair share of obstacles.

“From the edge of the garage to the back of the yard, you couldn’t even walk through it. We rented a chipper from Johnson Equipment to get rid of all the brush,” Chappell said. “It really has just been an ongoing process since then.”

Chappell’s home garden features lots of carefully pruned boxwoods. “As you grow older, you want more and more shrubs,” she said with a laugh, noting they typically take up more space and require less work than other plants – as well as a healthy collection of her favorite flowering bushes, including peonies and hydrangeas. Even though they are often used in her container gardens, she typically steers clear of annuals in her garden beds, focusing instead on fostering her seasonal perennials (some favorites include hellebores, candytuft, euphorbia, sedum and drumstick allium). Vinca periwinkle, a flowering groundcover, helps fill in some space and impart an ambling English cottage garden vibe to both the front and backyards. While she’s proud of her space and what she’s learned over the years, she admits much of her expertise did not necessarily come naturally – it’s a process she’s studied closely for years and one she has worked hard to master.

“The nice thing about gardening is you can learn so much,” she said. “It’s just trial-and-error – sometimes you win and sometimes you lose.”

As her business requires her to spend less time on her own garden and more on helping beautify the space of others’, she is grateful for the strong bones that she and Pfeiffer laid over the years, in her own yard – maintaining the garden requires time, of course, but she finds it to be a process that reaps rewards.

“There’s always something to be done,” she said, “but I enjoy it.”

More info on Chappell’s business, Blooms, can be found on her Instagram page (@blooms.design).

Workshop Info: On May 14, Betsy Chappell will team up with Martie Mayer of Lilies at Nursery Place Greenhouse to present a workshop where attendees can create their own moss-lined basket to take home, featuring an assortment of annual plants. The event has limited spots available; tickets include brunch and cocktails. Email [email protected] for more information and to reserve your spot.