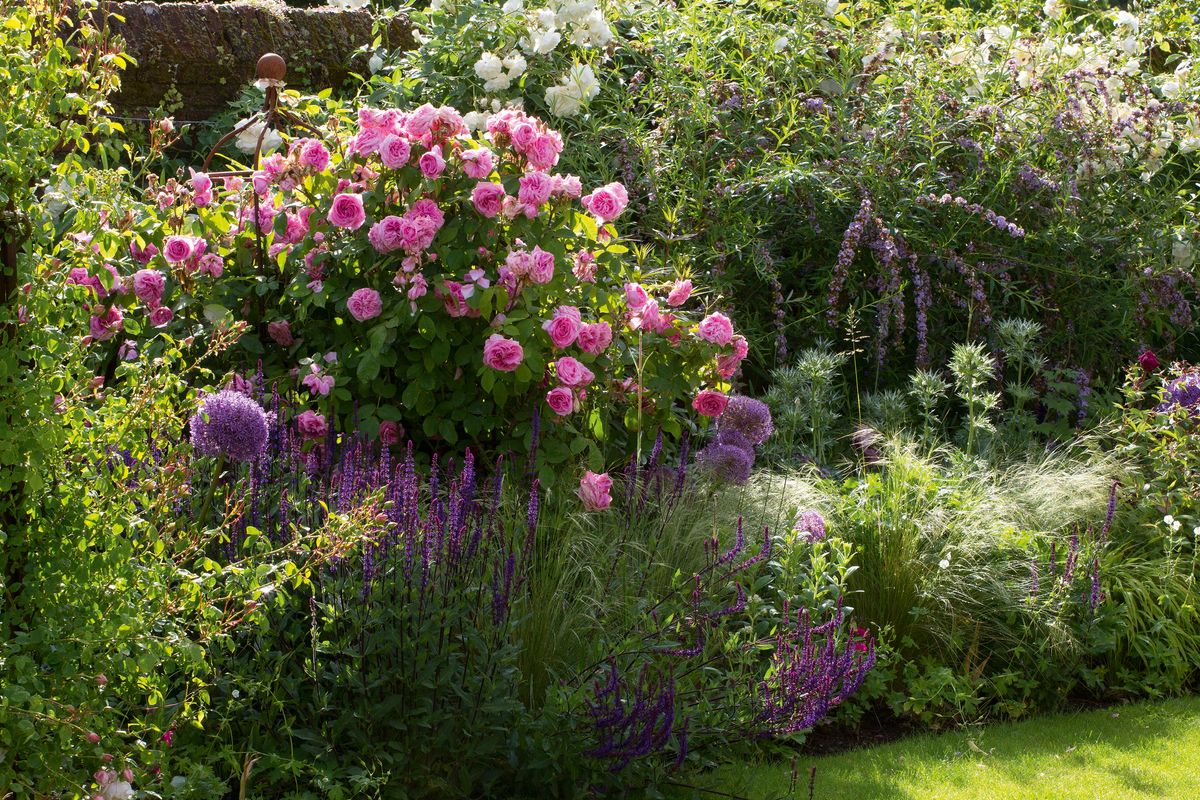 Rose garden design has been popular for centuries and roses have an enduring prominence in our gardens, putting on a show-stopping flowering display and prized for their rich variety of colors, blooms, scents and forms.

But while rose garden ideas are often associated with more traditional garden design, either in more formal, classical settings, or as part of a quintessential cottage garden or traditional herbaceous border, they work just as well in a contemporary, naturalistic scheme.

‘When deciding on the layout of a rose garden design, consider how formal or informal you want it to be, as this will dictate the type of roses planted and the design,’ explains Michael Marriott, world leading rosarian and rose garden designer.

Some people can feel intimidated by the thought of growing roses – but don’t be. ‘Roses are simply flowering shrubs and that’s how you should use, and treat them,’ explains rose consultant and designer Paul Zimmerman.

The style of the rose garden design or area should take its cue from the overall garden design and the proximity to the house. You should also consider the conditions in your garden or the chosen spot to ensure you plant roses where they will have the best chance of success.

‘Areas close to the house tend to be more architectural, so you could plan a more formal, traditional arrangement, surrounded by low hedging, such as if you were designing a parterre garden.

‘In a contemporary setting the pattern could be asymmetric, extending the lines of a terrace or paved area that in turn links with the house,’ advises garden designer David Stevens.

How do you layout a rose garden?

When it comes to how to layout a rose garden, ‘the more you are surrounded on every level by roses, including climbing roses and ramblers on walls and overhead, plus shrubs, tree roses – or standards – and weeping standards at ground level, the more you can achieve an atmosphere of romance and elegance,’ advises designer Jo Thompson.

‘A formal rose garden design may comprise a number of carefully laid out beds in a symmetrical pattern and will require more neat and upright roses, such as the Hybrid Teas, Floribundas and some of the English Roses,’ advises Michael Marriott.

‘An informal rose garden design may be just one or more informally shaped beds, filled with more shrub type varieties like many of the old roses, hybrid musks and English Roses. The extreme of the latter would be species or species type roses planted in a meadow,’ Michael adds.

As a practical point, don’t make the flower bed ideas too wide. ‘You want to be able to get close to the roses to admire and smell them without trampling the underplanting. Leave space for maintenance and access,’ says designer Richard Miers.

‘There are roses that will suit every garden aspect, but south, east, west are best to give you the most choice of variety. Ideally you want to be able to see the roses from the house, so planting them not too far away is a good idea,’ Richard adds.

How can you create a naturalistic, modern rose garden design?

‘To create a more naturalistic and contemporary rose garden design, plant roses in among a selection of ornamental grasses and perennials, where the goal is to let the roses intermingle with the other plants,’ explains designer Colm Joseph.

He offers the following tips for incorporating roses into naturalistic planting designs:

What rose varieties can you include?

‘One of the great joys of roses, is that they are almost endlessly variable, from tiny little plants 12″ tall, to great monsters growing 40ft plus up trees, and from tiny flowers less than an inch across to ones that are 7-8″ across and from 5 petals to 200,’ explains Michael Marriott.

‘They include every color except blue and some are bicoloured. They are enormously variable in fragrance, so it’s good to try and choose varieties that are not only as fragrant as possible but include all the different types in your rose garden design,’ he adds.

As with all plants, you should choose the rose varieties to suit the space they are going to occupy, and the surroundings.

‘Most people want any plant to provide interest over as long a period as possible and roses such as floribundas, Hybrid Teas and climbers can flower from as early as April or May right the way through to Christmas,’ explains David Stevens. He lists some of his favorites:

Most roses repeat flower but in a larger scheme, especially, it is well worth including some once flowering old roses as they can add a different type of character.

‘It is good to have variation in height in a border. In a formal garden this could be achieved by using tree roses, or standards, and climbers on various supports, such as obelisks, pillars, arches or pergolas. In an informal setting there many tall varieties that could be used at the back of the border ,’ explains Michael Marriott.

Can you mix rose colors?

Roses are often organised by color in more formal rose garden designs, which has greater impact, but in a more informal, or naturalistic planting design you can experiment more.

‘Most roses will mix well together, with the exception of the Hybrid Teas that tend to have rather strong, hard colors and very upright growth that doesn’t sit well with the older roses and English Roses,’ explains Michael Marriott.

You can choose a palette of one color, or a variety, but think about where the roses are located in the backyard.

‘’Hot’ colors draw the eye and cool colors do the opposite, so if you have an area of vibrant red, orange or yellow roses at a distance down the garden it will draw the eye and foreshorten the visual space. Instead, use cool pastel colors, and keep the brighter ones close to the house,’ advises David Stevens.

‘Color choices are key. If you’re going for an all pink palette, for example, make sure that the tones and shades are in harmony,’ adds Jo Thompson.

What goes well in a rose garden?

There are many good companion plants for roses that go well in a rose garden design.

Consider biennials and annuals as well as perennials to plant alongside roses.

‘The possibilities of companion plants are endless and the key thing is to let your imagination run wild and see what works. Some companions that I find work include clematis, astrantia, salvias and asters,’ explains designer Richard Miers.

‘Think what you are planting behind the roses, so that it acts as a foil, helping the flowers really stand out. Yew does this really well in a large garden, roses and box are a classic English garden combination, and lavender also works well,’ adds designer Claire Merriman.

Do roses need sun or shade?

‘Roses generally want sun for at least half of the day. While some varieties are more tolerant of shade than others, generally the more sun will mean more flowers. Shelter is also quite important for many varieties,’ explains Claire Merriman.

In warmer climates shade from the afternoon sun may well be beneficial.

What should you not plant around roses?

You should not plant trees or big hedges or shrubs around roses.

‘Also avoid any plants that are too invasive, which might encroach around the base of the rose and starve it of water and nutrients,’ he adds.