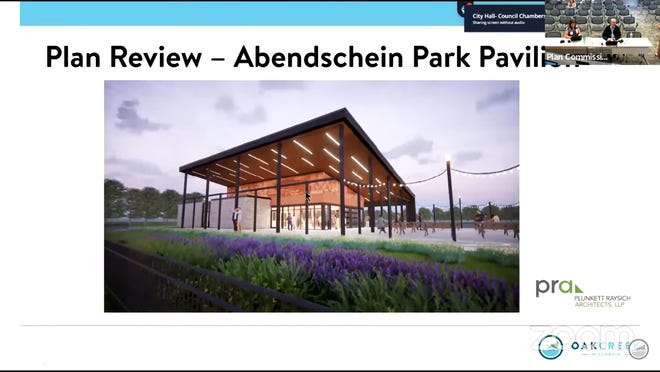 Oak Creek is planning to build a pavilion in Abendschein Park with design elements specific to hosting beer gardens.

The city’s plan commission on May 24 unanimously approved site and building plans for the project at 1321 E. Drexel Ave. The plans were created by Milwaukee-based Plunkett Raysich Architects on behalf of Oak Creek.

Plans indicate the structure would encompass 3,573 square feet of enclosed space at the northwest corner of the park north of the parking lot. City code allows for up to 75 people seated at tables but up to 225 standing inside.

Some amenities include bathrooms, a kitchen area — which Oak Creek Director of Community Development Doug Seymour described as a “warming kitchen” where people could also make up sandwiches — and a serving window to get beer or other consumables to those outside the pavilion. The main hall area includes a removable beer tap station, according to city plans.

Outside a 5,000 square-foot gravel area and additional lawn space were shown with a 2,817 square-foot outdoor patio space for outdoor seating.

Plans also referenced future projects including expansion of the parking lot, from 142 to 194 spaces, with two entrances of the existing road leading out to Drexel Avenue and a small stage near the pavilion.

Seymour said the project fulfills strategic objectives of the city. He also made it clear this pavilion isn’t solely a single use structure.

While a beer garden is the highlighted primary use, city documents indicate the space can also be used for other gatherings/events and as a rentable space during the off-season. Current scheduling indicates the main pavilion hall will be rentable by the public November through early April.

Oak Creek has hosted pop-up beer gardens in Abendschein and Lake Vista Park in the past.